At our Houston personal injury law firm, we were saddened to hear of the death of a pedestrian who was struck by a Houston Fire Department non-emergency vehicle.

The accident happened just east of downtown in the middle of the day on Jensen Drive close to Highway 59. According to the fire department spokesperson, a civilian employee was operating the non-emergency vehicle when they hit a pedestrian. 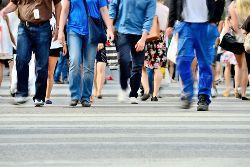 According to witness reports, the pedestrian was sitting on a concrete wall on Jensen after finishing lunch at a nearby soup kitchen. The Houston fire department’s vehicle reportedly jumped over the curb and landed on top of the victim, crushing him.

One of the witnesses was a friend of the deceased pedestrian. Franp “Gino” Huyn recalled that his friend had just greeted him moments before being killed. Huyn—and others who witnessed the crash—tried to rescue the man pinned under the car. Huyn was angry at how the fire department handled the Houston car accident, saying they did not seem to care about the pedestrian under the car.  He claimed he saw them take phone calls instead of helping the victim.

The fire department is not releasing the names of the victim or of the employee involved in the crash. They’re also not saying what position the employee held. Instead, they are saying that the employee is devastated over what happened. The employee suffered minor injuries as a result of an airbag being deployed. According to preliminary investigation reports, it appears the white car is the one at fault for the accident and will likely receive a citation.

We extend our heartfelt condolences to the family and friends of the pedestrian struck by the car.